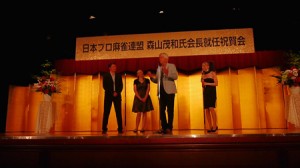 In their report, the following proposals were formulated:

– The rules for the WCR will include ‘Open Tanyo’ (‘all simples’ can be played with melded sets) and ‘red fives’.

TNT and EMA have to discuss all these and other details yet, just like the subscription fee. In the weeks and months to come, these have to be worked out. Valérian Thomas and his brother Quentin of TNT have yet another challenge to meet and that’s sponsorship. The deadline for this final step will be end of September.

The WCR initiative was taken in February 2011, when Martin Rep proposed the Dutch Mahjong Association to have him investigated the options for a similar event. This assignment soon was taken over by EMA, and supported by Reachmahjong.com, a bilingual (English/Japanese) website and forum about riichi mahjong.

JPML reacted quite positive on the idea. This association of professional mahjong players will also take care of the subscriptions of players from other Japanese mahjong associations. JPML is delighted with the intended venue, since Paris is an attractive tourist destination for Japanese.